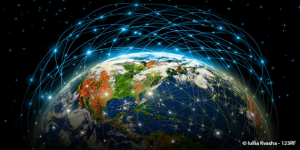 Under Prof. Adrian Perrig‘s and Prof. David Basin‘s supervision, a group of researchers published a new paper on a fascinating topic: Internet Backbones in Space.

Satellite constellation networks are one of the most recent and exciting developments in networking. Renewed interest in this area has been sparked by an unprecedented wave of investments to develop and deploy a new generation constellations. These are composed of thousands of small satellites, orbiting the Earth at low altitude. The first revolution promised by these networks is to bring Internet connectivity at broadband speed to the most remote corners of the globe.

But this is not the only advantage this new breed of constellations can provide. Since satellites are very close to the surface of the globe, relaying signals to Space and back on Earth is much faster than with “traditional” geostationary satellites. As a matter of fact, communicating over satellite networks will be even faster than with terrestrial optic fiber on medium to long distances. The Network Security Group is studying new solutions to exploit the full untapped potential of next-generation satellite networks.

The results of the goup’s explorations show how the Internet architecture SCION can be beneficial to this setting, as the inherent diversity of the satellite and terrestrial paths can be exploited using end-host path control and multipath routing.

If you are interested in more details, you can read the full paper here.