Decentralized Cryptocurrencies such as Bitcoin or Ether have become popular over the last few years, a development that has not gone unnoticed by central banks. Due to this popularity, as well as the increasing digitalization of payments and the constantly reducing role of cash in society, central banks around the world are increasingly interested in deploying a digital equivalent of cash, a so-called central bank digital currency (CBDC). 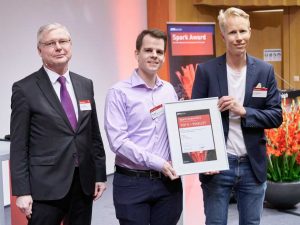 Even though most recent research on digital currencies focuses on blockchain technology, it is unlikely that this technology provides the optimal solution for a CBDC, in particular due to its inherently centralized trust model.
Former ZISC researcher Karl Wüst, together with ZISC researchers Kari Kostiainen and Srdjan Capkun have developed a privacy-focused design for such a CBDC, called Platypus, that works in this centralized trust model. Platypus was recently nominated, and selected to be one of the Top 5 finalists, for the ETH Spark Award that is awarded yearly to the most promising invention at ETH in the previous year. As part of the nomination process, ETH produced a video about the invention for all finalists, which was released during the award ceremony last week.
In Platypus, users trust the central bank for the integrity of the currency (e.g. to ensure that a user cannot spend the same money twice), but not for their privacy. The system makes use of zero-knowledge proofs to ensure that no party, including the central bank, can see any information about a transaction, other than that the transaction is a valid payment. The system design also includes mechanisms to enforce compliance rules in a privacy-preserving way. For example, such a rule could include that a user needs to report high value transactions to a regulator. Platypus ensures that users cannot circumvent such rules but at the same time fully protects privacy against any party other than the regulator.
More information can be found in the research paper.