With today’s widespread Internet usage, the total electricity consumption of its infrastructure (networks and data centres, but not consumer devices) is significant, namely around 500 TWh per year or 2.5% of worldwide electricity consumption. Moreover, as Internet traffic volume is steadily growing, this energy consumption could experience an eight-fold increase by 2030. Since electricity production still emits considerable amounts of greenhouse gases (475g CO2 equivalents per kWh on a global average), the growth of Internet traffic presents a serious concern regarding climate change: If the projections are true, the Internet would be responsible for an additional 1.7 billion tons of GHG emissions per year by 2030, corresponding to Russia’s 2019 CO2 emissions. 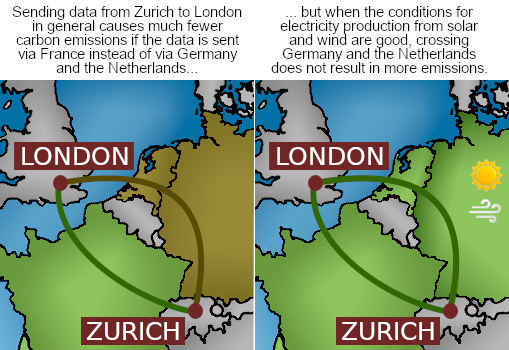 How can the ecological footprint of the Internet be reduced?

To tackle this challenge, researchers working on the SCION Internet architecture have recently proposed “green routing” in an article for the World Economic Forum
(https://www.weforum.org/agenda/2021/03/internet-carbon-emissions-data-path-scion).

The fundamental idea behind green routing is to exploit differences between paths regarding the carbon emissions from transmitting data traffic over these paths. On the one hand, these differences can be due to geography: The carbon intensity of electricity differs between countries depending on the used technologies in the national electricity sectors. Interestingly, these differences are not static; many countries have recently ramped up their capacity of variable renewable energy (VRE) sources such as solar and wind, resulting in a much greener electricity mix under favorable conditions for VRE. On the other hand, the carbon differences between paths can be due to active efforts undertaken by the network operators on the path, such as optimizations of equipment energy efficiency or premium purchases of green electricity. If forwarding paths can be augmented with carbon-intensity information and can be selected based on ecological considerations (as would be straightforward to implement in a SCION Internet), this huge potential for emission savings in the Internet’s core network could be unlocked.

Many exciting research questions revolve around the idea of green routing, namely:

The Network Security Group is currently exploring all these research questions. Finding an answer to them will be instrumental in fulfilling the promise that carbon-oriented path selection offers.